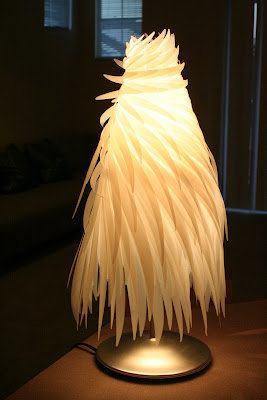 This is my new lamp. It's named Daedalus, after the Greek architect who created Minos' labyrinth. According to mythology Daedalus and his son Icarus were imprisoned by Minos to protect the secrets of the labyrinth. In order to escape he created wings out of feathers and wax for himself and his son. They flew away from Crete to freedom, but the careless Icarus flew too high and the heat from the sun melted the wax in the wings and he fell to his death. Daedalus eventually landed in Sicily where he built a temple to the god Apollo and offered up his wings as a sacrifice.
Design as beauty and tragedy. It seems apropos to own it.
Posted by Holly at 9:42 PM

Beautiful! I wish I was a working woman and could buy gorgeous designer lamps. Lucky.

Ahhhhh...nice! What is it made of?

It's made of layers of a thin plastic, like mylar. It can also be hung as a pendant. I love it.

Your lamp is beautiful! I've been wishing for the last week that you were here and could help me figure out what to do with my 2 big blank walls. I'm baffled by them.