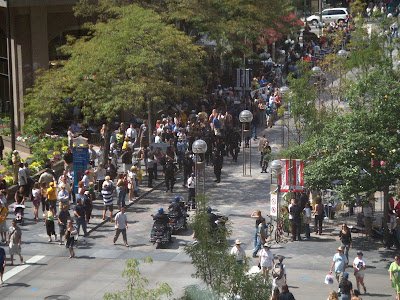 This is a view of the craziness outside my building today. Protest drama came in the form the Pro Life Rally. SWAT teams dutifully arrived, but mostly to keep everyone on the sidewalk so they wouldn't be hit by the buses. Protestors are certainly passionate, no matter what they are shouting about. This woman with a bull horn was on an hour long anti-abortion rant. I wonder if she changed any minds. I wonder if anyone changed another's mind today. 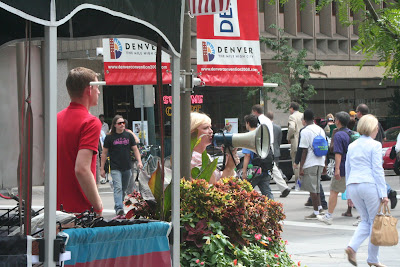 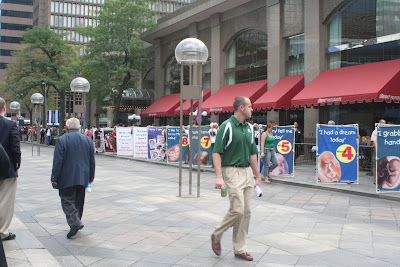 I haven't had any luck on the celebrity front, but a friend in the office did. Susan ran out to Barnes & Noble and got this picture of Susan Surrandon outside of Earl's. 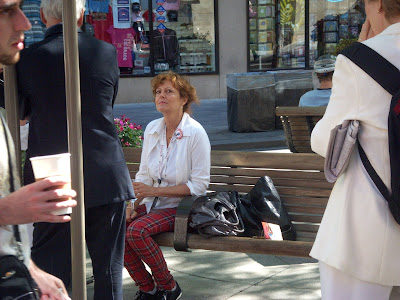 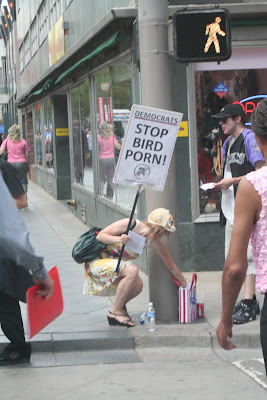 I got a copy of their manifesto. It's written in Russian on the back. 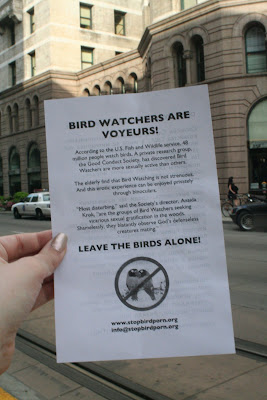 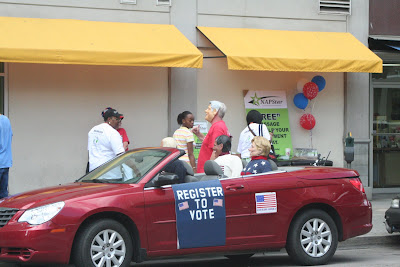 Bill and Hillary were out making sure everyone was registered to vote, but don't you think they're preaching to the choir? Wouldn't everyone at the DNC already be registered? 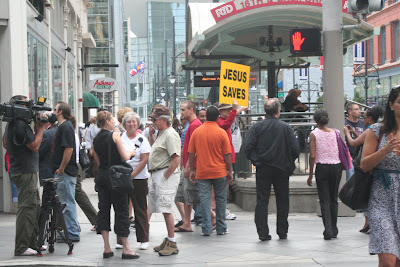 Then there was the Jesus Saves Guy, but he's always here so I don't think he counts. I didn't see any McCainiacs out today, but I did find Fox News. Not the local Fox, but the real Fox! I wanted to give them a hug too. 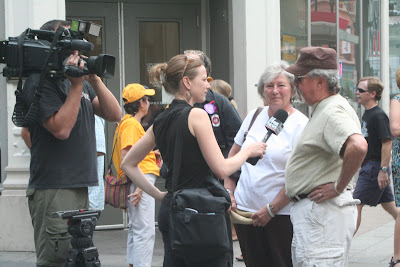 Sean Hannity got his own shout out below. Message to "Hillary's Non-Obama Supporters": Run! 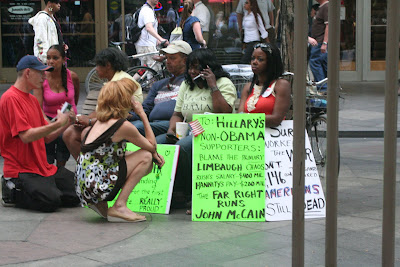 See what I mean about bad fashion? 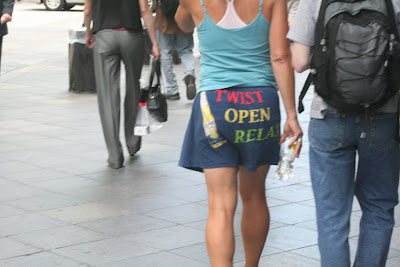 Classy. Not just the twist open relax, but the VPL of the woman on the left.
I wasn't fast enough to get pictures of the donkeys riding around on segways, but one thing I haven't seen at the DNC are the homeless. There are a group of regulars that are on the streets every day but they are nowhere to be found this week. The joke is that they were all given movie tickets, but I suspect they were bused to Fort Collins.
Stay tuned for Day Three. 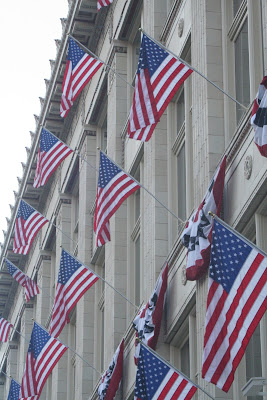 A Republican at the Democratic Convention 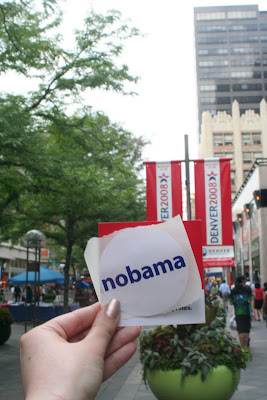 It's been 100 years since it happened last, and when it finally came around again I find myself stuck in the middle. I'm a Republican and the Democratic National Convention has descended on downtown Denver. This is even more annoying than having no interest in baseball and finding myself in the midst of the World Series last fall. It does however make for an interesting walk at lunch.
Light Rail this morning was packed! (Once again proving Americans do not know how to use public transportation, but that's a rant for another day.) My building is on lockdown and I need picture ID and a keycard to get on and off my floor. On the walk in a local news crew was reporting in front of a stall called Denver-crats selling "Obama-bling". 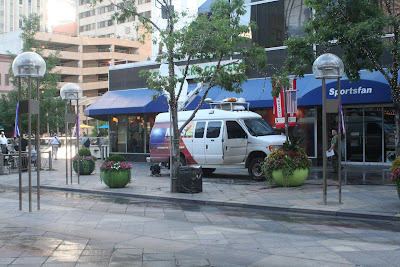 When I snapped this shot the reporter (Chris Parente from News2, in the blue shirt) had just finished saying, "Good Morning Denver, Good Morning delegates, and Good Morning Oprah!" (apparently she's in town), and was throwing the shot over to the vendor. 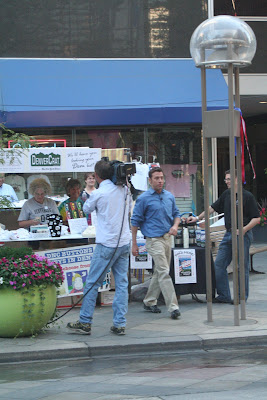 At lunch Kitty, Thana and I headed out to catch some action. Not that I've been here that long, but I have never seen this many people in Denver. It was almost like being in Chicago or New York, except for the SWAT teams. 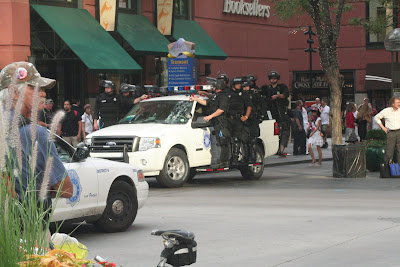 The Police are everywhere, and in huge numbers. They're not messing around. 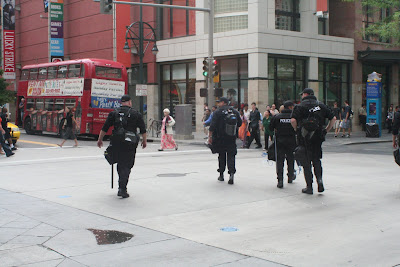 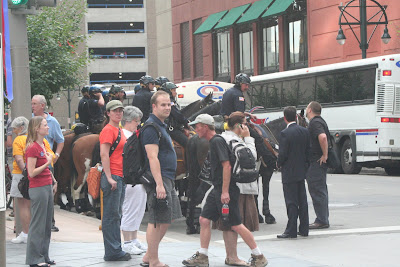 The crowds don't seem to mind though. The atmosphere is charged, and it's a little surreal to see it all. The usual buskers are out. 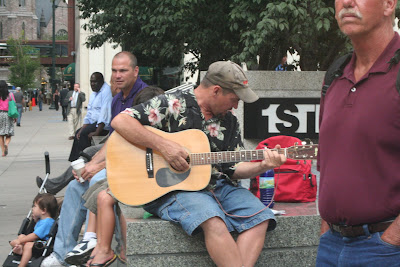 I see this guy everyday, usually singing "Hotel California", but he's been joined by a slew of new street performers. 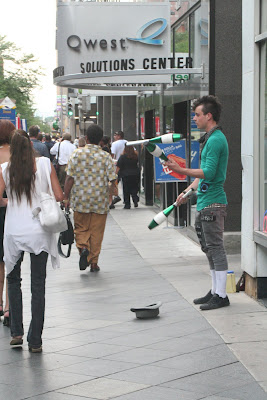 The number of vendors has also doubled. In addition to knock-off designer bags (a Denver staple), you can now get a bit of entertainment with your over-priced t-shirts. 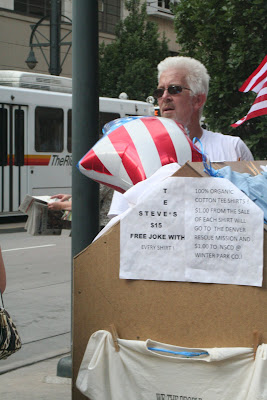 I wonder, if you buy two shirts, will you get the third joke free?
There are more protestors out than there are delegates or tourists. PETA pigs, anti-war activists and vans with awful photos of aborted fetuses plastered across them are making their way through the streets. (Making me very happy I'm staunchly pro life.) I also ran into some McCain supporters who gave me my "nobama" sticker. I was so happy to see them I wanted to give them a hug.
I just saw on the news that shortly after I left work the police had to tear-gas a protest group across the street from my building. Tomorrow I'll see if I can get pictures of a riot. 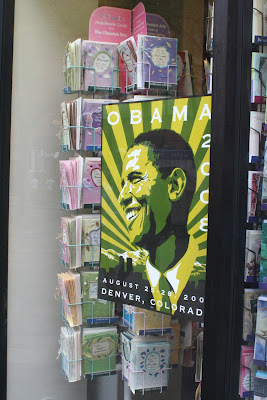